For four years, Henry Harris went one-on-one with racism, the Old South colliding with a New South in the life of one brave young man out of Alabama's Black Belt. Every night he stepped onto the court for Auburn he wasn't challenging the Wildcats, Bulldogs, or Crimson Tide but the hardened, dogged beliefs of a centuries-old civilization. Harris would blow up all of the era's stereotypes of black athletes, and he did with a dignity and courage that would have made Jackie Robinson proud. And then, when he had played out his role, he exited the stage, dead at twenty-four. Yet, his shadow lengthens each year.

His story, Shakespearean in breadth and power, has gone untold too long, for it represents an essential chapter in U.S. history. It is a story of hope, tragedy, redemption, and—ultimately—hope.

Segregation stunted lives, vilified an entire race, and endured on American indifference. How it was finally overcome by one brave soul at a time is one of the most undocumented chapters of the American twentieth century. Society progresses through human sacrifice, so how Harris and other daring young African Americans used their lives was as vital as it was valiant. Their stories cannot slip into obscurity.

Henry Harris helped drag the South into tomorrow. Basketball in hand, he marched forward when his state and country needed him to change the South. You cannot change what you will not confront, so someone had to stare down old Jim Crow. "God always sends the best men into the worst times," said T. D. Jakes on the day of Barrack Obama's inauguration. For Auburn to be "integrated with Henry Harris," said one of his coaches, "was God's work."

The assignment was more grueling than Harris could have imagined when he graduated from Greene County Training School in Boligee, Alabama, in 1968, the script bigger than he and the other pioneers of southern sport could ever dream. They were pawns in an epic and historical drama, sport's ultimate role players. Their assignment was to kick down a heavily guarded gate to fair play and the American dream.

Harris was only eighteen, a country boy who had never left home. Living in an abandoned store with his mother, brothers, and sister, he moved onto a campus that was never home. If he embodied hope to some, he was a harbinger of dreaded change to others, and few could understand the pressure he was shouldering. But Harris persevered, kept moving forward. He knew if he misstepped, integration would stall. He was a young man carrying a grown man's responsibility, trying every day to do the right thing, trying to make not only his family proud but a whole race of people that he was carrying on his back.

"Henry gave to me and every Auburn University black athlete, and every black athlete since in the state of Alabama, a chance to play ball on a level that had been denied before," said actor Thom Gossom, Auburn's third black athlete. "There were good days and bad ones for Henry but not many happy ones. . . . But he bore it for those of us who followed."

Harris often told Gossom he integrated Auburn and the SEC for "the old folks," the ones back home who told him that it would be "a good thing." "It's time. Someone has to do it," they said. Henry Harris became their hero. Their savior. Their hope for years to come.

The story of a brave young American who made his life matter . . . 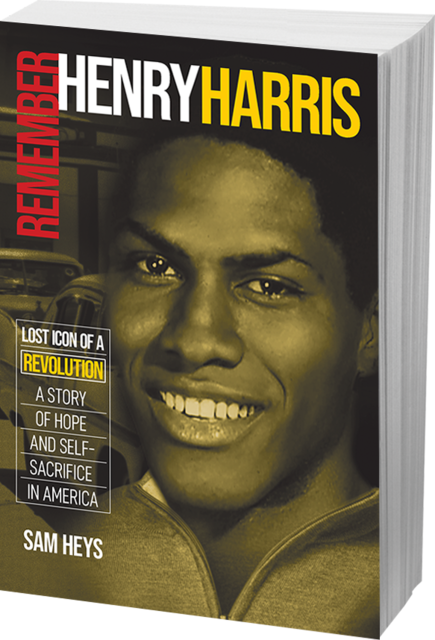 can be ordered at: